To compensate for the lack of computer resources, I had migrated my PC, which had been left in Windows 7, to Windows 10 yesterday to create a docker environment.

I was up late at night trying various methods, such as sending docker images to a remote location, but it was difficult to create an image of the entire database, and after trying docker export/import/save/load everything,

"Manually copied the content itself to a USB memory stick, currently in the middle of rebuilding the DB"

Well, I don't mind, since it is a program that I am making alone.

As for me, I don't want to add too many PCs to be managed, however I have no choice.

I cannot leave the simulator stopped due to database overload.

I need three minutes to annoy to choose between getting 100 yen or 200 yen icecream.

However, I wouldn't worry too much about buying a $300,000 gaming PC to run my simulator.

When I was a struggling student, I had purchased a computer with a list price of 850,000 yen with cash.

The "pursuit of high-specification computer" is like a "curse" for engineers.

As I have written many times in the past, an 850,000 yen PC (a supercomputer too) at that time cannot beat even a 5,000 yen board computer today. 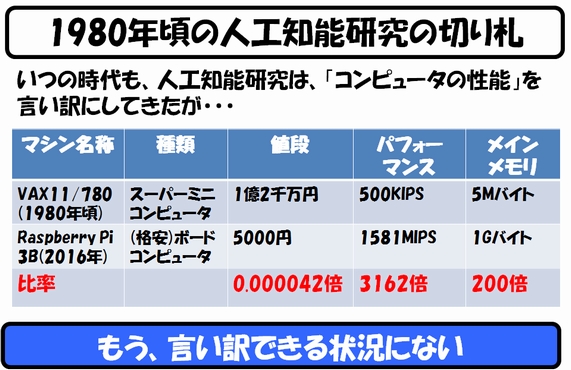 Engineers & researchers with common sense should not dance around the "spec.".

"Do the math in your environment"

If it is to be read this way, I think it is a correct suggestion.

In my column which is released yesterday, I wrote

"To become a guru, I must first have a story that I am "enlightened"!"

It is true that it is relatively easy to obtain "revelations" in daily life, e.g., through extreme dieting.

This has been proven by my own physical diet.

In addition, I have, in fact, brought God down many times (really). 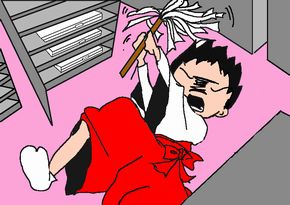 In other words, the "revelations of founder of religion" in the scriptures, including those of the world's three major religions, are quite 'dubious tale'.

Incidentally, one of my methods of repelling religious solicitations is to 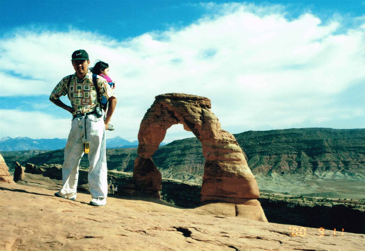 "Have you ever heard or seen God? What? No? And you're proselytizing to me?"

"I think you are a little presumptuous are't you?"

is a method to 'show the difference in class'.

2022-09-30 "Yes. I think so. I saw LDP General Affairs Chairman Tatsuo Fukuda on the news once saying, 'I don't know what the problem (about the Unification Church) is,' and I involuntarily lectured him on TV, saying, 'What the hell have you learned so far?'" [長年日記]

Today, new my column is released, so I take a day off. 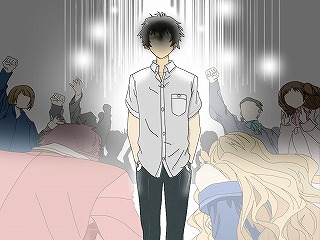 Frankly speaking, the last column was not very well accepted -- from my viewpoint based on Twitter or rankings.

I made some revisions, but to be honest, I was disappointed because I put a lot of effort into writing it.

Ebata: "Yes. I think so. I saw LDP General Affairs Chairman Tatsuo Fukuda on the news once saying, 'I don't know what the problem (about the Unification Church) is,' and I involuntarily lectured him on TV, saying, 'What the hell have you learned so far?' "

Ebata: "Yes! That's "no" in any case. Is there such a member of parliament in our country?"

Junior: "It is possible that he had at least some knowledge, but he did not feel the impact (anti-social activities such as psychic sales and excessive donations) firsthand.

Ebata: "Really? When I was walking around college campuses, there always seemed to be a sense of tension that if I wasn't careful, I would get hit."

Junior: "Also, it's possible that activity on the cult side is declining."

Junior: "There has been no improvement in the congregational recruitment approach -- they are just using existing methods and not improving their approach. And so the cult side is on the verge of extinction"

Ebata: "If it's on its way to extinction, that's great... but there are still a lot of approaches that could be taken, like the 'one-op missionary' that I proposed in my column, right?"

Junior: "I think the problem with cult groups is that they can't make such 'IT literate' people into believers."

Ebata: "I see. Religion and IT don't seem to go well together..."

Now, in this column, I would like to look at your "interest in cults".

Please note that I am also personally releasing an unmodified version of my previous column to anyone who is interested.

The other day, I took a photo from a photo machine (speed photo).

For the first time in my life, I wore "glasses (reading glasses)" to take pictures.

I was horrified when I saw the photo for my passport renewal.

I thought that if I were involved in an accident or incident and this photo appeared on the news, I would be assumed to be the "perpetrator" or "culprit" without having the news story confirmed.

On the day of the "State Funeral," I spent the entire day confined to my home and worked.

The other day, I was asked from my reader,

"Did you start charging for your articles?"

and I was really surprised.

I remembered that for smartphone, user registration to EE Times Japan has been needed as one-action process.

However, you don't need to register from the web browser of PC

Anyway, reading my columns are free of charge even now. I mean, I have no control over this.

I apologize for any inconvenience.

I think that there are more requests for this type of user registration recently.

I am not good at the actions like this either. so I happen to sto

This cases are apt to happen on Nikkei-XXX site. This is because I am "fed up" with the survey sheets that are required after this registration.

As a general rule, I do not answer surveys that have more than 10 items. It is because it is too much trouble.

The other day, I went to visit a gym for muscle training, and the moment I saw the questionnaire form (double-sided, with super small characters) that I had to fill out before the visit, I said

and left the gym.

I decided that it was not worth the cost of responding to this survey, as I only wanted to tour the gym facilities.

And maybe many facilities and portals are missing out on potential customers like me because of the 'discomfort' and 'hassle' of users.

If they don't realize that, I think that they are "stupid."

If they realize that, I think that they are "unhelpful stupid."

I used this document to provide an overview of the agent simulation to our internal team members.

Member A: "By the way, are these illustrations by Ebata-san?"

Ebata: "I "make" them. It is the same as a patented invention. It is "this illustration characterized by the composition 1, composition 2, and composition 3.

"It is a serious matter that our engineers do not know Steins;Gate""

"Stein's Gate, aside from others, is a required course for engineers and researchers"

"It would be incredible to work designing the city of the future without seeing Steins;Gate"

"Of course, we must complete to 'Zero'"

I've made them a mess for a long time.

The team members were put off by what he said, however I don't care of it.

To Mr. Prime Minister of Japan

When I was a rookie, I was told by a senior, and scoled

"Ebata! "Careful explanation" does not mean "to talk about the same thing over again slowly!"

2022-09-25 In my wife's mind, 'a small experimental database that I created locally just for my own programs' is not included in the database. [長年日記]

When I joined the company, the lack of computer resources was a chronic problem.

Efficient use of memory was the biggest challenge, as creating a three-digit two-dimensional array alone would not allow the program to run.

At work, I was fighting for workstations.

However, PCs no longer face this problem as they now have ample resources.

With the advent of programming languages (such as Go) that are strong in concurrency processing, objects of the order of one million can now be handled as usual.

However, I should not be reckless.

"pq: sorry, too many clients already"

I have tried various responses to the database screams, but when I checked the resource manager, I found that the disk (write) usage was over 99%.

Well, I thought, writing 100 agents' information 30 times per second to a database created in docker, the database would scream.

I have been living without resource shortage problems for more than a decade, so I guess I did not realize how reckless I was.

I was having a conversation with my wife.

Wife: "What! That's an accident! Are you okay?"

We were both nodding our heads like 'What are you talking about?'

What the general public associates with the word "database" would be an administrative management system, an electricity delivery system, or an e-commerce system such as Amazon.

If that type of database were to go down, it would have an enormous impact on social life.

In my wife's mind, 'a small experimental database that I created locally just for my own programs' is not included in the database.

I think that is the feeling of ordinal persons.

It is natrual that I pay for time to write my column, however, I have to waste time to make a illustration.

Watching manga-books, I woder "how can I draw this", and I try to figure out how to imitate the drawing in my own way,

"People who have the ability to draw are still great"

The drawing make me respect them.

2022-09-23 "For the sake of its own security, any nation will not hesitate to overstep the interests of other nations" [長年日記]

I don't understand what the current Russian (president) is thinking -- some people say that, however I want to ask them,

To me, the Russian mindset is palpable.

- Violation of the prohibition against the threat or use of force against the territorial integrity or political independence of a country (Article 2, Paragraph 4 of the UN Charter) ---> Unilateral abrogation of the Soviet-Japanese Nonaggression Pact

Russia said that it was taking the lead this time "for its own self-defense," but Japan at that time also claimed that it was "for our self-defense" in establishing Manchukuo and expanding southward (invasion).

Incidentally, the overwhelming majority of the Japanese people at that time overwhelmingly supported this "right of self-defense of our country.

To me, there does not seem to be much difference between Russia today and Japan back then.

Incidentally, treaties, whether bilateral or multilateral, can be broken unilaterally.

Moreover, there is no penalty. This is because there is no entity that can enforce effective penalties.

Ebata: "I would say it's only a 'comforting' measure. Of course, countries that break treaties lose international credibility, and they can retaliate by raising tariffs or other measures, but that's about it.

Of course, there is no need to defend Russia's invasion of Ukraine, not even a millimeter.

As a member of the Western world, our country (Japan) feels that condemnation of Russia is both an emotional justice and a national interest.

A cursory study of modern world history ("imperialism") will make this obvious.

History has shown us that

"For the sake of its own security, any nation will not hesitate to overstep the interests of other nations"

and that, as far as I know, there is not a single exception to that rule.